Scroll down to know in detail about McFadden and Parkison’s daughter. Also, know their pregnancy story right below:

Brian McFadden And Danielle Parkinson Are Blessed With A Child

Irish singer, who has released four studio albums, is now father to a newborn daughter. The 41 years old singer has finally welcomed a kid with fiancé Danielle Parkinson. The duo welcomed a baby girl.

McFadden posted an image on Instagram where her fiancé can be seen pushing the newborn baby’s pram. He wrote: Mammy, Daddy and baby out for our first walk together. It’s been the best week of our life. 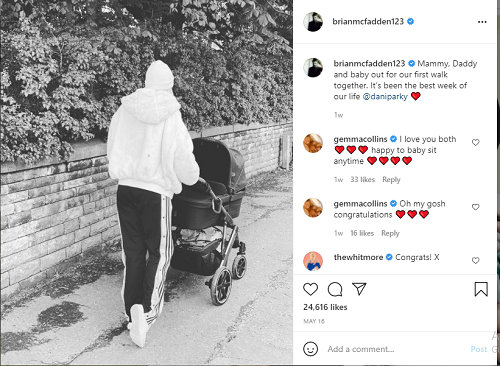 Celebrities like Gemma Collins, Laura Whitmore, Shane Lynch, and many others were quick to congratulate the couple!

The television presenter announced the pregnancy news back in December. Also, speaking with OK! Magazine, the couple revealed that their happiness arrived in May, after almost two years of IVF treatments.

Parkinson revealed that they were lucky to have a child on their third attempt.

During the interview, the duo also revealed that Zara Phillips and Mike Tindall helped them get in touch with a nutritionist. Brian said:

Mike and Zara put us in touch with Simone the nutritionist who got us prepared for this time.

Back in late 2019, the couple revealed that they suffered a miscarriage. As per sources, his fiancé suffers low egg count. When she knew about her pregnancy, she was thrilled.

The pair also in one time admitted to considering a surrogate and adoption as a future option.

McFadden Claimed That Marriage Can Wait

For your information, McFadden and Katona started dating in 2016. The singer got engaged in December 2019 via Instagram. He popped the question on Christmas 2019. His partner is a PE teacher.

The pair, who is currently focusing on their newborn child, revealed that they put their wedding on hold amid the coronavirus pandemic. Speaking with Heat Magazine, he said:

We've put our plans on hold for the moment. We're just going to wait and see what happens over the next few months.

McFadden claimed that he would not ask his children to be his bridesmaids as they have already walked down the aisle with their mother multiple times.

McFadden has been married twice. He was previously in a relationship with singer Kerry Katona. They got married on 5th January 2002. The duo also welcomed two daughters. After four years of marriage, they divorced in 2006.

After divorce, he started dating Australian singer Delta Goodrem. They also got engaged but ended their relationship in 2011.

He then went on to marry Irish model Vogue Williams. They got married in 2012 but separated in 2015. Their divorce was finalized in 2017.