Andy Biersack of the American rock group Black Veil Brides’ has officially confirmed his marriage to American singer and girlfriend of 5 years now, Juliet Simms. The wedding took place yesterday on 16th of April. Apparently the whereabouts of the wedding is still unknown since it was an uber-secret affair. 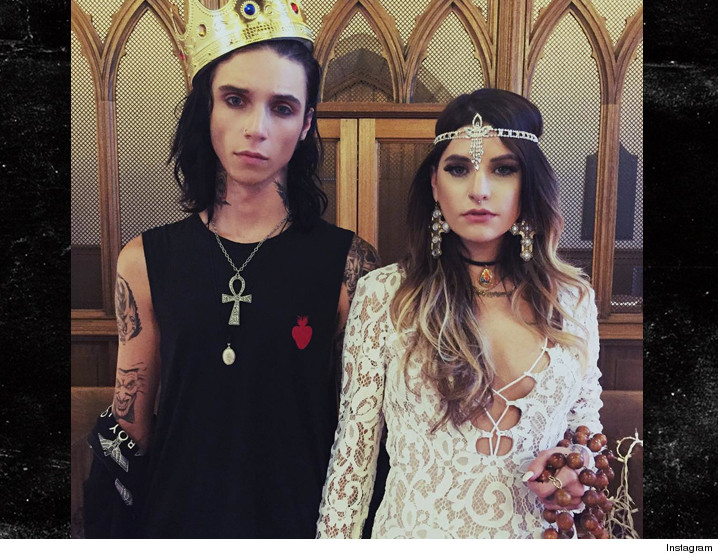 Well, the couple had a unique way of announcing their marriage, they took it to their twitter bios for the announcement.

“Your mine forever now baby my white rabbit and I Won't ever let go -Dragonfly Married to @JulietBiersackx Father”, says Andy’s twitter bio.

Juliet who exists on Twitter now as Juliet Biersack had a similar thing going on hers’ as well.

The couple who had been engaged to one another, few months back were expected to get married somewhere outside of L.A in the presence of family and very close friends.

The rock couple officially started dating at the Long Island Warped Tour in 2011 and have been going ever so strong since then. The couple has many great romantic stories of their own, in a 2013 interview with POZ, they shared a bit of it.

Merry Christmas and Happy Holidays from our family to yours! @thejulietsimms @daredevilthedog Crow and Femme! #whodey

There’s a couple! We were walking through bus world, and that’s where we screamed at the sky, like, “I love Andy” and “I love Juliet.”

Since they’re both busy bees with tours and gigs, Juliet led on a bit more about how Andy despite being this huge rock star he is, makes time to be around her,

“He’s being too humble. He’s been incredible. Seriously, he’s been helping me a lot with management, promotion, and anything I need to do, from “what shirt should we make?” to “this song” or “that set,” and setting up things for shows. He came out and was on tour with me in a van! No laying down or anything, and just helping me with everything.” In March 2015, the couple came up with a charity project, Prizeo Charity Page to support the Alive Music Project and the It Gets Better Tour (both part of the Gay Men's Chorus Los Angeles or GMCLA). In the first day alone, the duo raised $15,000.

And just when we thought the couple couldn’t get more relationship goals, Andy featured in Juliet Simms’ “End of The World” video in May 2015.