Every year this time around America goes wild with the festival Coachella. The destination for everyone for celebrities to normal people. It also happens to be one of the few places to birth out new trends and catch new stars among thousands.

Victoria's secret model Alessandra Ambrosio this year has already begun creating fashion news. Her statement wear has immersed itself into her thousands of followers and she has taken number one spot at this year’s most trending celebrity and her attire just two days into the festival. 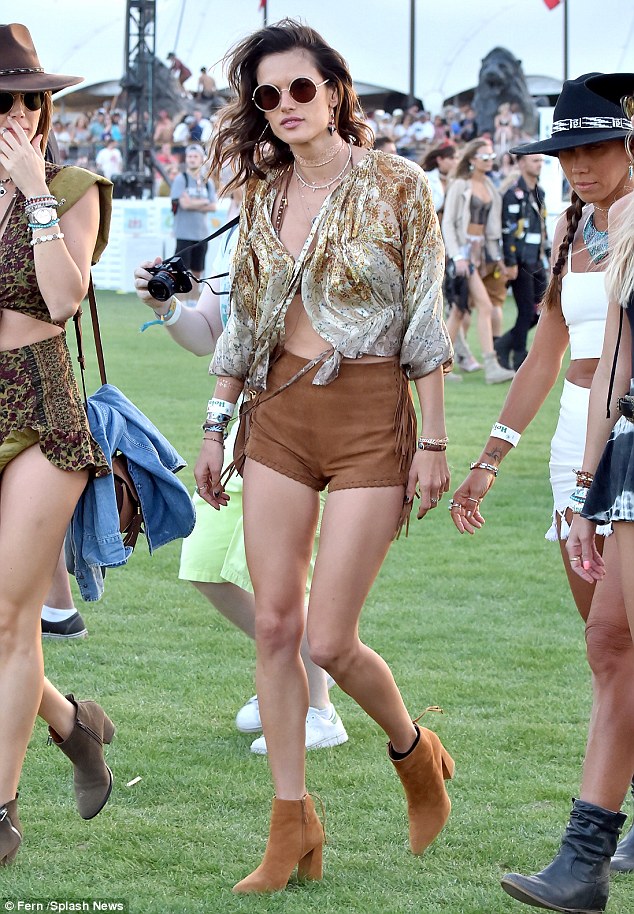 Her cloth of choice for this year Coachella being suede. Pictures of her have shown her rocking suede boots and suede shorts that are of a natural tan brown color. Her style choices have been shared over a thousand times already after being public.

Many fashion followers have already begun singing praises for her and have called her style a perfect reflection of her cool attitude and elegantly appropriate dressing sense. Her style choice seems to have been inspired by the seventies summer of love look. This she nailed by improvising it to today’s standards.

She also showed off her perfect legs and her tanned body that said she had been preparing for the festival well in advance. She made her entrance with her entourage of model friends. A few days earlier Alessandra had posted a gif on her Instagram page indicating

a proper tanning session in the open with her entourage. The gift was titled “Warming up for Coachella”.

Most of her earlier posts also have been about her tanning sessions at her L.A home for Coachella. It has been suggested that she has spent a lot of time and proper care for her tan this year. Her go-to outfit for this year’s Coachella all has been heavily inspired from the seventies and eighties lookbook.

Many other celebrities and model attending the festival have already picked her style of choice and have been trying to improvise her look individually. She was also accompanied by her fiancé Jamie Mazur on the evening. That evening too Alessandra did not let go of her suede boots. Those have somehow become her footwear of choice for these events. Her standard uniform nail paint is glossy black which she is totally in love with and just can’t let go off.

She also happened to be accompanied by famous Brazilian filmmaker Raul Guterres. They being seen together have also sparked some rumors that Alessandro might just be the next female lead in Raul’s upcoming movie. The rumor had begun a while back when the two were seen multiple times back home in Brazil.

She already has a movie up for theaters this summer. She will be playing one of the main characters in the highly anticipated summer movie “Teenage Mutant Ninja Turtles: Out of the Shadows”.