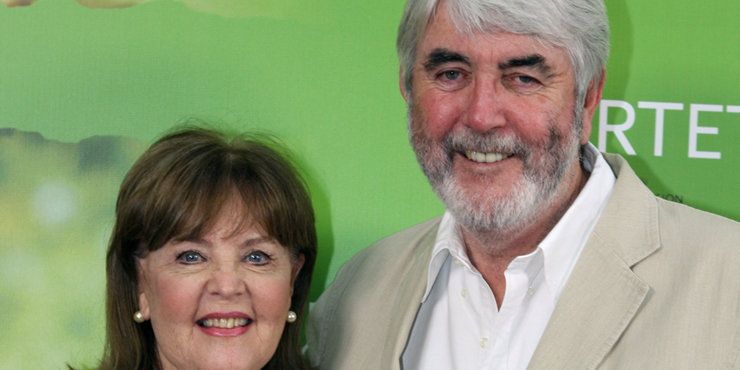 Prominent actress Pauline Collins, age 75, has always been praised for her role in the film, Shirley Valentine and for her portrayal as the maid Sarah in Upstairs, Downstairs. She is happily married to John Alderton. They have been together for a long, long time and all ready to celebrate their 50th anniversary in a few years.

The couple seem quite excited about celebrating their golden jubilee, a celebration of love and togetherness. Pauline and her husband John got married in 1969 and are 3 years away from their 50th anniversary. Still, they are already excited about the event.

There has been a rumor going on about the pair getting their wedding vows renewed again in their anniversary, with the same ritual that they followed when they first got married. May be they want to re-live the precious moment of their lives?

Another exciting factor about the celebration is supposed to be their wedding location. “The exact place and the decorations from their first marriage have been selected for the celebration in 2018” reports the insider, who is quite close to celebrities in question.

The gorgeous actress even plans to get ready in her same wedding gown. Rumors also suggest that Pauline and John have started preparing their guest lists for the event.

Despite these rumors regarding the event, no official announcements have been made by this adorable couple till date. However, the couple seems really excited and are reported to have already started planning big for their special day.

Not just the couple, but their children are also planning some surprises for their parents. What exactly would be the event like??? How big would be the celebration?? Well, the year 2018 will clearly answer these queries!

Brought up as a Roman Catholic, Pauline was educated at Sacred heart High School and studied Drama at Central School of Speech and Drama in London. She worked as a teacher before turning into acting in 1962.

She has shared the screen with her husband in many movies and TV shows. They first met on the set of Upstairs, Downstairs, on which John played the chauffeur Thomas Watkins and she played the maid, Sarah.

“The great thing about marrying someone in your own profession, whether it's a baker or teacher or actor, is that you understand each other's problems and strengths and weaknesses” said the actress in an interview. She feels blessed to share her life with a talented and creative man like John Alderton.

Pauline was rewarded with O.B.E (Officer of the Order of the British Empire) in 2001 and Tony Award for the Best Lead Actress in a play.

Pauline Collins net worth is yet to be revealed