15 Google Facts you must know 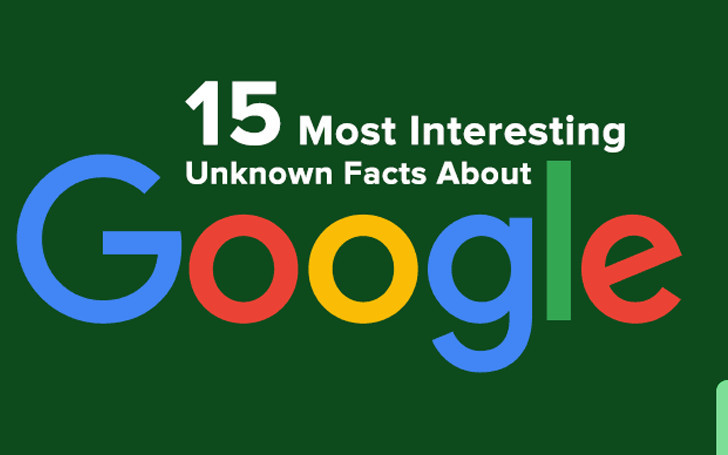 For searching some information, or ideas; where do you visit? The libraries and Encarta are histories. The World Wide Web is where you go. Where do you search, in search engine! Not all in a bunch but most of the people visit Google for search, as it is a most popular search engine.

Google is the most used search engine since 2010. Google is now a brand owned by Alphabet. Do you know the name ‘Google’ emerged by mistake? Or do you know Google could have been in the hand of a person other than Larry Page? Find out now!

Larry Page and Sergey Brin started a search engine within Stanford University, named BackRub. Google.com was registered on 15th September 1997. Google is a play word derived from the word ‘googol’. The misspelt word is now the most visited site.
The Google founders (1999) tried to sell Google to Excite Co. for just a million dollars. The Excite turned the proposal down pointing the limitation of use.

Google is the only company that hires workers based on the skills. The GPA and Scores on a test are not valued. More than 15% of employees in the company haven’t gone college.
Google’s Employees After-Death Benefit program is the unique motivational technique. If the employee dies, the spouse will get 50% of salary for next 10 years, and $1000 per month to the children until they reach 10 years.
Google hired more than 50 million cameras around the world for Google Maps. Even for the map in the desert, the company hired a camel to create the street view. Now, you could also guess what Google attempted for the water view!
The ‘I’m Feeling Lucky’ button was first coded in binary on twitter in 2009. This button decreases the company revenue by $10 million every year as this gateway bypasses all the ads.
Google is used to search information more than 33000 times per second.
Google’s revenue from advertising exceeds ABC, FOX, and CNN combined. Google’s per year revenue is $20 billion.
Google is expanding. The company is acquiring at 2 companies at least or more per month. Google chooses the company with high competitive power or small companies for utility purpose. Recently, in July 2016, the company acquired Kifi for integrating it in Google Spaces.
Google has a crazy taste on domains. Google Inc. owns main domain name for every region along with the specific misspellings like Gogle.com, Gooogle.com, and Googlr.com. Google also owns all short URLs for these domains. The domains like 466459.com and googlesucks.com are some crazy name tastes.
Google provides condoms to the employees coloured in its 5 different variants, each of them named as ‘I am Feeling Lucky’.
The good deeds always return good results. The woman’s garage where Larry and Brin started Google is now CEO of YouTube.
Larry Page is no longer the CEO of Google, Sundar Pichai is. Larry Page is now the CEO of Alphabet Inc.
Google goes through more than 200 rank factors, with the speed parallel to the speed of Juno, and shows the result in less than a microsecond for every search.
The goal of Google is unambiguous. The main goal of the company is to reduce the amount of time a person spends surfing and searching information. Thus, the result shown by the engine tends to be accurate.